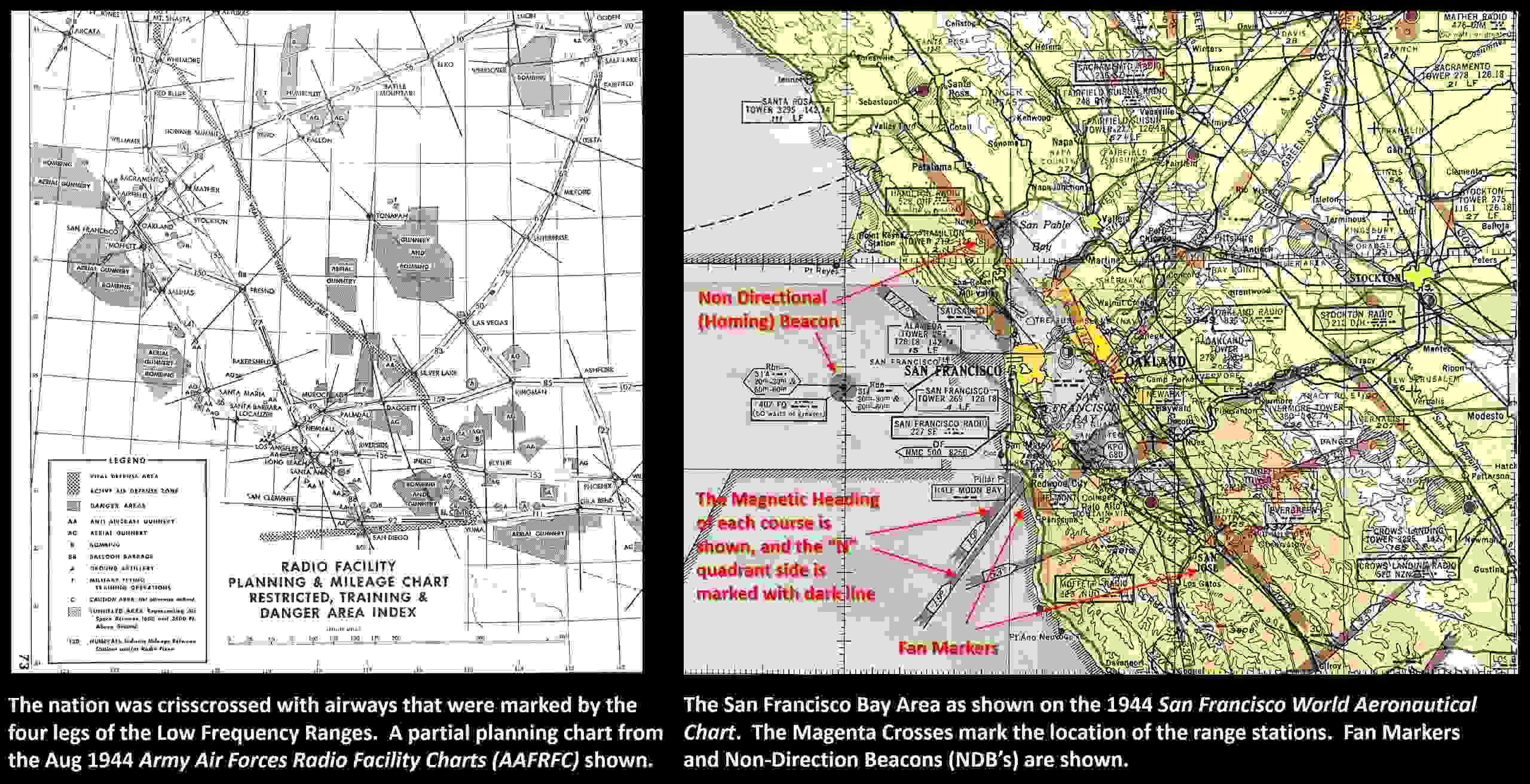 The Low Frequency Radio Range Airways pretty much followed the original Transcontinental Airway System, defined by the hundreds of light beacons set up during the 1920’s.  Not only did this serve as a reassuring back-up on clear nights, many airports and other aviation facilities were already well established along these paths. The new Civil Aeronautics Board (CAB) created color-coded east/west “Green” and “Red” airways and north/south “Amber” and “Blue” airways.  This convention is actually still used in some places internationally.

In many configurations, the station simply had four courses spread 90° apart. However, other stations managed to bend these legs in a “scissors” or “crow’s foot” fashion to match the alignment of airways. Each station's radio goniometer could adjust the overall alignment of its beam pattern, and/or power output to one or more antenna could be increased so their quadrants would expand and literally push back on the others, “bending and squeezing” the beams in-between to the desired angle. This effect also worked in 3D and could tilt the cone of silence, an important consideration for pilots.

The basic theory of flying from range to range was straightforward: as a pilot crossed the country, he (which was nearly always the case in that era) would fly the outbound leg of one station out to its maximum range of 50 to 100 miles then tune the inbound leg of the next station. The pilot would often need to fly a different heading from the actual airway to compensate for crosswind but the reference to the beam would assure the plane maintained a direct course. Fan markers would provide milestones to check progress against. The pilot would constantly have to adjust the headset volume as a station grew closer and louder, typically needing to lower the volume significantly just before the crossing. Suddenly, the volume would die off as the cone of silence was reached and, in many cases, a high-pitched Z marker confirmed passage. The signals would resume and fade again until the next range was tuned. Along the way, the pilot would receive regular updates of the weather ahead, and if equipped, could communicate with air traffic control. It worked well under optimal conditions but, as with any first-generation technology, there were many limitations: 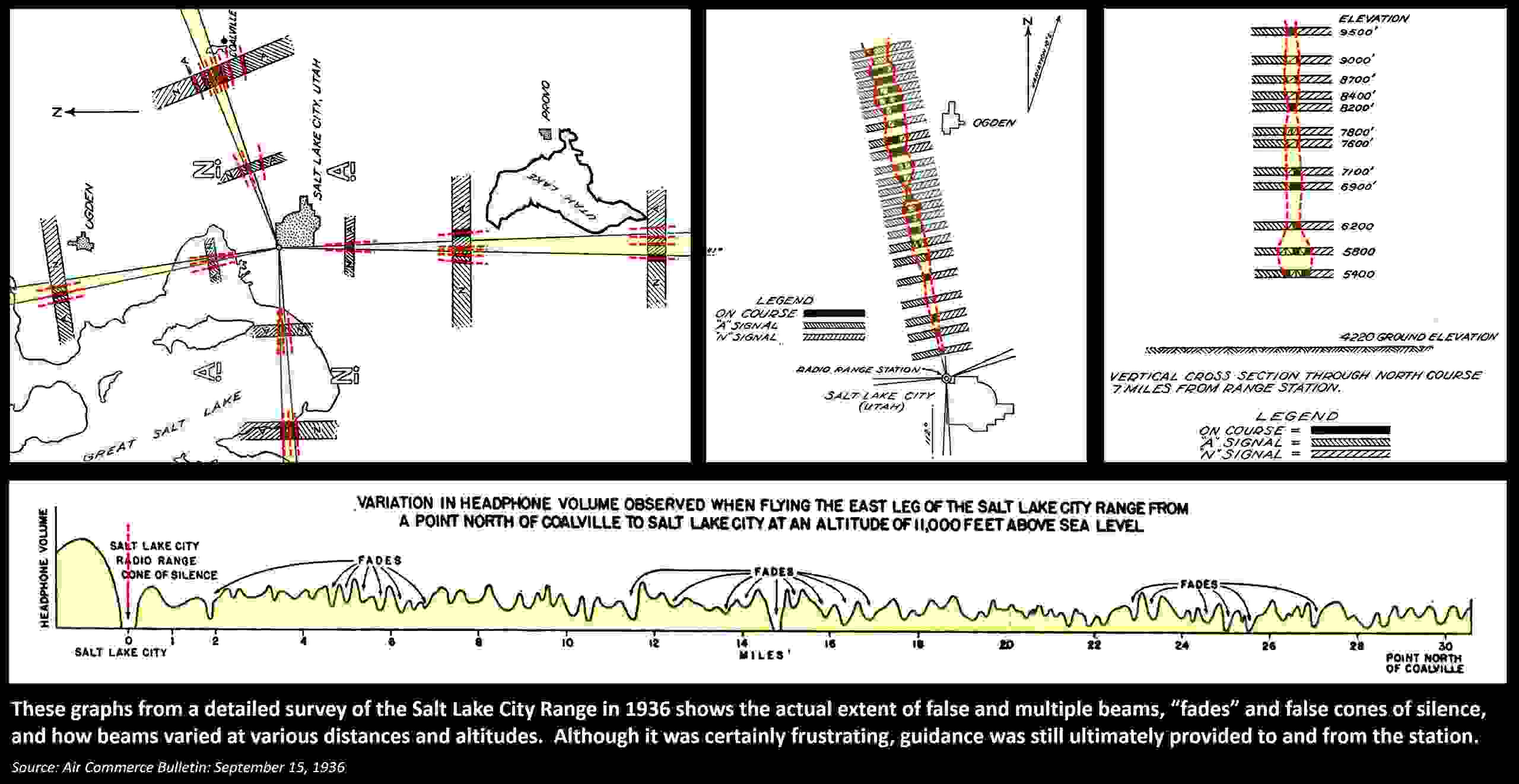 Despite all these faults, the system was simple, cheap and it worked. For the first time, aircraft could reliably navigate without having any contact with the ground. Not too dissimilar from modern standards, holding patterns and instrument approaches were developed that allowed pilots to land at airports with low cloud ceilings. In short, this system ensured that weather simply wasn’t a factor and regularly scheduled airline service could be established regardless the conditions. This is one of the main technologies that allowed the arrival of that Golden Age of Travel. But as always, technology was ever evolving...

Next: What Happened to the Range

The Sounds of the Low Frequency RADIO Range

What follows below are actual sounds of what appears to match the Syracuse Range (Morse code identifier “SR” or “dot-dot-dot, dot-dash-dot”) in the 1950’s, in the waning days of LFR. These recordings were specifically made for pilot training by wiring a hi-fi recorder directly into the headset feed. They were generously provided by author Barry Schiff who owned the company that developed these educational materials, who is gratefully credited for these and other contributions under Resources.

Again, pilots would have to listen to these signals for hours on end on a noisy flight deck, often through static and other interference. 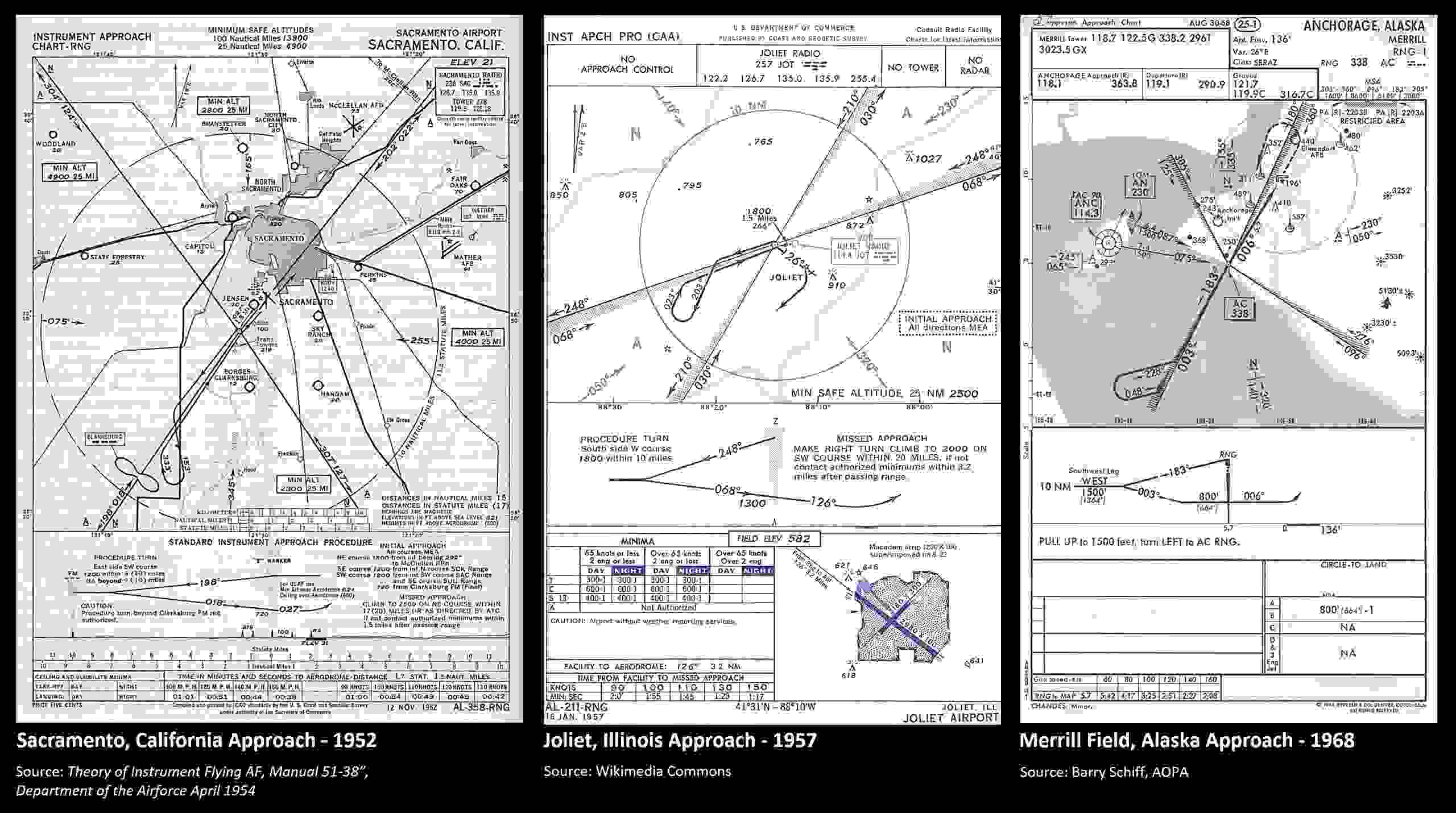 PS: For those instrument rated pilots out there who are curious, approach plates from three low frequency range approaches are shown above - the "real" world version of the simplified approach diagram shown earlier. These were all non-precision approaches that are analogous to modern day VOR approaches, with the initial fix always over the actual station itself. Interestingly enough, no specified altitude was marked for the procedure turn or other intermediate points, just the initial fix and the final passage on approach back over the range station. Additionally, under Resources, one can find an early 1960's ADF/LFR briefing card and 1940's route planning charts.