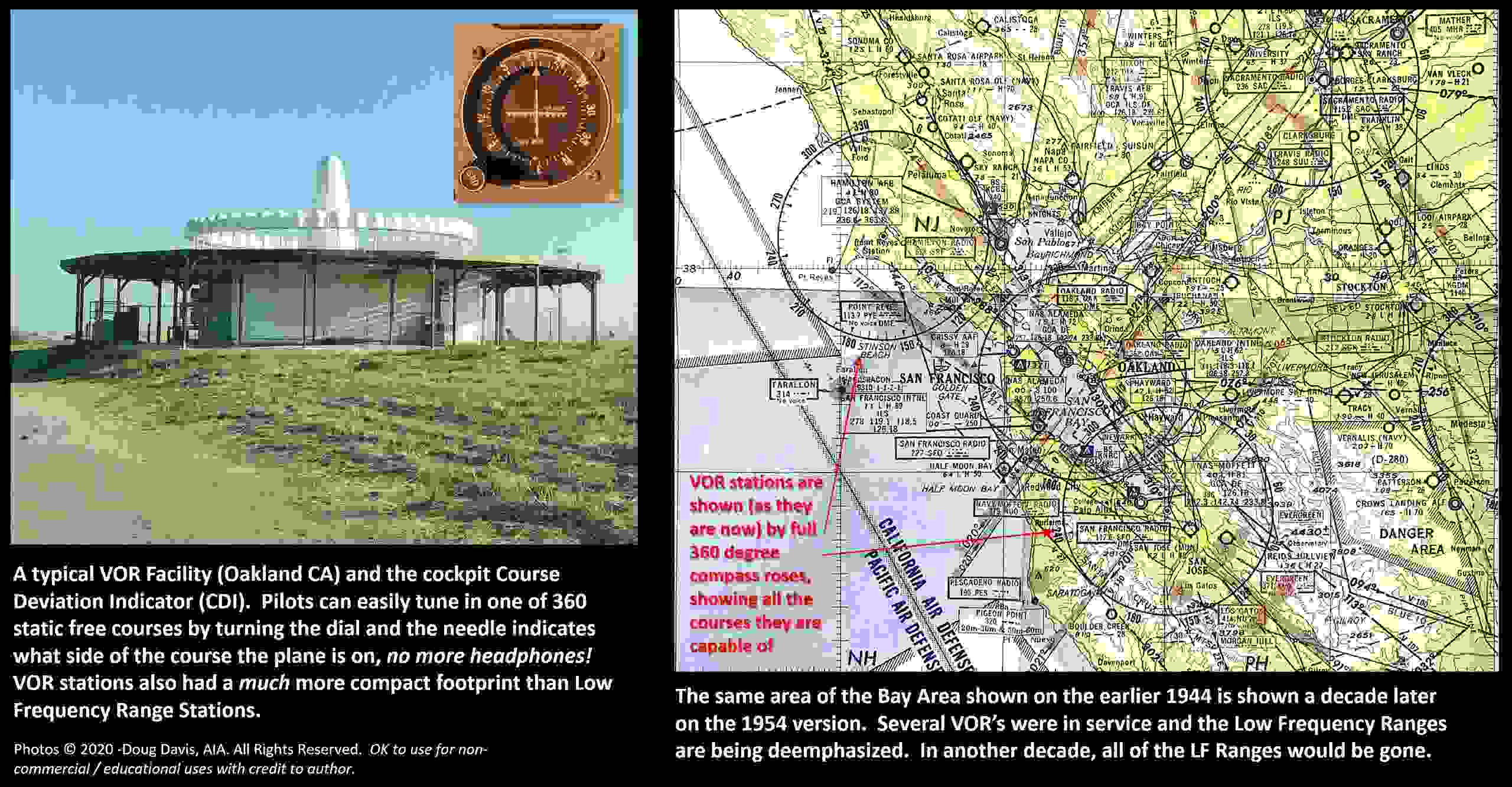 VOR'S & THE DECLINE OF THE LOW FREQUENCY RADIO RANGE

Although the Low Frequency Radio Range system was heralded as a breakthrough, it was obvious that it was less than a perfect system from day one. Almost immediately starting in the 1930’s, development started on its eventual successor, the Very High Frequency Omnidirectional Radio Range or VOR; specifically to improve upon the very real limitations of LFR system. A patent was filed by David G. Luck of the RCA Corporation in 1940. A complete system description can be found here, but these more advanced stations could support 360 radials or “beams.”  This provided far greater flexibility for the new Federal Aviation Administration (which replaced the CAB in 1958) to develop routes and pilots to track their own heading to stations – a pilot could basically have a “beam” wherever he or, increasingly, she wanted. The basic principle was this: 30 times a second each station sent an omnidirectional radio pulse followed by a directional beam that was swung around the full 360° like a lighthouse.  The delay between the first pulse and second beam as seen by the aircraft was proportional to its bearing from the station. When it debuted right after the Second World War, the system offered several compelling advantages that systematically addressed LFR’s shortcomings:

In short: it was simply a much better system. It was made possible by the continual miniaturization of electronics, first by mini-vacuum tubes during the war followed by the transistor in the 50’s and 60’s. Radios were now cheap and lightweight and even small general aviation aircraft were starting to have a full suite of communication and navigation radios. Even the old clunky radio compass evolved into the Automatic Direction Finder (ADF) by the 1950's, which simply pointed the way to beacons with no effort on the pilot’s part beyond tuning the station. However, it was the VOR’s that took over the primary role of defining the new “Victor” or “V” airways, or above 18,000 feet the “Jet” or “J” routes - a role they still serve today.

There was an intermediate hybrid approach first demonstrated in 1941 called the “Visual / Aural Radio Range” (VAR) that used the same ILS equipment and frequencies that military and commercial planes were now increasingly equipped with. It was actually intended to be the original successor to LFR, but wartime radio component shortages stymied its rollout. It used interference-free VHF similar to a VOR, but still projected four courses. The main difference was that while two opposing courses were “aural” and functioned like those of an ordinary LF range, the other two courses 90° to the first pair were visual. They were, in essence, a long-range localizer or the horizontal portion of the ILS, and the pilot read the same needle used during landing to determine if the plane was to the right or left side of course. One side was designated as the “blue” side that emitted a 150 Hz tone, and the other the “yellow” side that emitted a 90 Hz tone which the instrument read. It would have been a decent upgrade in the early 40’s; however, it was still limited to four courses, and only two of those were visual. While it sat benched, the war rapidly advanced the VOR’s VHF technology and made it the far better solution when peace finally returned. Only 68 VAR stations would ultimately be built in the US.

VOR stations (“the Omnirange” or just VOR’s) were first deployed in 1946 and their meteoric adoption was paralleled by the start of the Jet Age. The new 707, DC-8 and other jets carrying the newly branded “Jet Set” were in many ways easier for pilots to fly. For example, 4-engine propliners had sixteen touchy levers for throttle, mixture, propeller RPM and cowl flaps. Equivalent jetliners had a single set of four thrust levers. However, they were also nearly twice as fast, covering 10 miles in a minute, meaning pilots had less time to complete their workload. Navigation had to be simple and easy for these pilots and they were the first main users of the VOR system. General aviation soon followed. In parallel, the military with its even faster planes adopted its own version called the Tactical Air Navigation System (TACAN) which used a higher frequency (960-1215 MHz) that provided greater accuracy and smaller station size (there are even mobile truck mounted units). These stations are often combined with many VOR stations as VORTAC’s and typically appear as a compact cone on top. Eventually, over 3,000 VOR stations would be built worldwide.

A 1954 Air Force flight instruction manual already described the LFR system as “antiquated," only 25 years after its debut.  The government had already begun decommissioning stations in 1952 and by 1960, the number fell 42% to 245. As their low-frequency radio waves did a great job of bending over terrain, they had a longer life in some mountainous areas. But even this small advantage did not prevent the last US station being pulled from service in Alaska in 1971. Internationally, the last one was shut down in the mid-1980’s in Chihuahua, Mexico.  No US VAR stations lasted beyond the 1960’s.

As of 2021, after 70 years of faithful service, VOR’s are now in a similarly endangered position LFR was in the 1950’s. There are now several satellite navigation systems (GPS, Glonass, Beidou and Galileo with more scheduled) that provide far greater accuracy utilized with Area Navigation (“R-NAV”) techniques that are becoming the standard for aircraft navigation. These are much easier to use (e.g. your location is simply shown on a moving map just as in a car), and there are no signal range or coverage gaps with the omnipresent signals from the sky. However, one major concern will keep VOR’s around for a while: in the event of an international crisis, it is quite possible one or more GPS systems could be compromised or selectively shut down for certain geographic areas and user groups. Being located on terra firma within national borders, VOR’s are immune to this form of attack. As such, the US plans to maintain half of its current 967 stations as backup.

Due to their cheapness and low maintenance, many NDB’s persisted to this day - especially in remote areas. However, VOR’s new role as the secondary backup to GPS has now rendered them fully obsolete. They were removed from FAA pilot instruction in 2017 and most of the stations that remain will likely be pulled from service before 2030.

As discussed, the advent of the VOR made the old Low Frequency Radio Range stations obsolete practically overnight. In flipping through old aeronautical sectional maps from the 1950’s and 60’s, one can see the familiar VOR compass roses multiplying like rabbits as the old range symbols faded away.

It would have seemed logical to simply reuse the LFR station sites for the VOR’s, but as discussed above, VHF required that they instead be placed at higher elevations or at more open sites that had a direct line of sight to aircraft. VOR’s that defined the high altitude Jet Routes were unconstrained by topography, but the VOR’s that marked the lower altitude Victor routes still were and generally followed the old LFR network - many VOR’s simply coopted the old LFR station’s name.  In the Western US it appears only one site may have become a VOR (Marfa, TX). A few other LFR stations kept their center antenna and lived on as Non Directional Beacons (NDB’s), the secondary homing beacons the new ADF’s could point to, and a few have survived to this day after eighty years of continual service. Other sites were logically repurposed into another type of commercial or government radio facility. But in the end, most sites were disposed of.

As stations started to be decommissioned in 1952, in most cases the government removed the equipment, antennae and sometimes the blockhouses (leaving the foundation pads) as made clear by the stations that started disappearing from aerials during the late 1950’s through the 1970’s. In other cases the US Government offered the new owner / landlord a check to simply walk away and leave everything “as is”.  This latter instance appears to explain the two very well-preserved California stations at Whitmore and Fort Jones, and quite possibly the stations at Lawson, Georgia (but actually in Alabama) and Whiting AFB, Florida. In far out areas, the salvage value of the equipment couldn’t offset the cost of hauling it off, and many remote stations such as North Shore in Alaska or Fort Chimo in Quebec were just left standing in the wilderness.

In urban areas, the stations that were once built comfortably on the outskirts of cities and towns in the 1930’s and 1940’s were now multi-acre parcels of appreciating land in the way of rapidly growing suburbs, and as such, many were redeveloped.  Federal law requires that public uses have the highest priority in surplus land sales, so many sites became parks (baseball fields are common) or part of a freeway right of way. That said, through the quirks of selective land use, the remains of a surprising few survived.

Out in the countryside many old stations occupied prime farmland. Once the structures were cleared the site was typically ploughed under and reused; however, the foundations of some sites were left over and can still be seen in aerials. It some cases the site’s original boundary / fencing (e.g. the old parcel) are observable. Rural areas typically provided the best opportunity for something to remain of the old stations.  Even here, redevelopment has claimed many, while the remains of others can longer be positively identified due to erosion and vegetation growth. 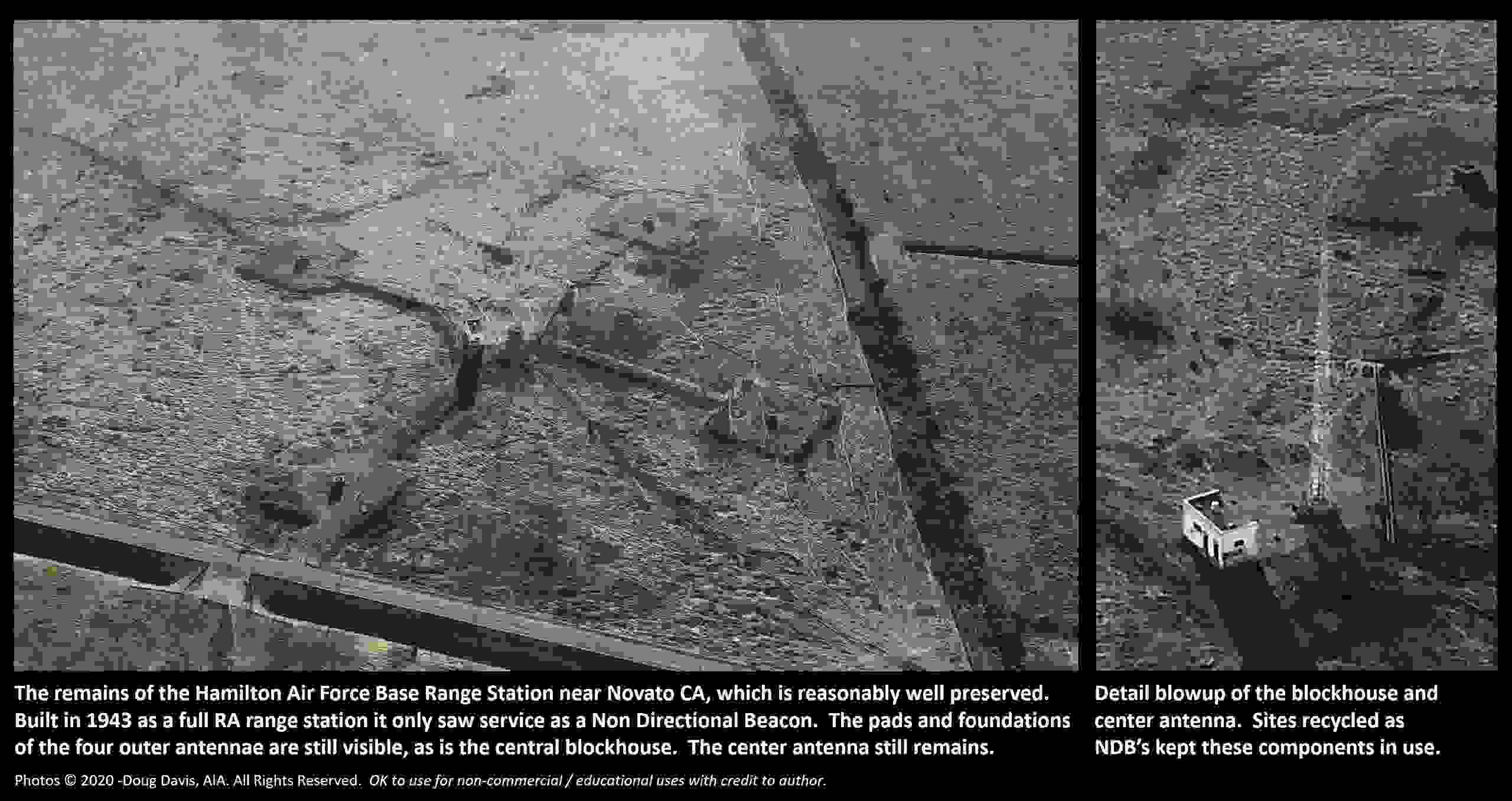 Are There Any Active Preservation Efforts?

Short answer – not much, if any.   After reviewing nearly 700 Range Station locations in North America, it appears that there are just three station sites that have been somewhat preserved and are accessible to the public:

Although I obviously have some interest in this subject, I acknowledge that this a fairly esoteric topic that’s not front and center in most people’s minds. In addition to this view, there are a number of factors that have and will continue to stymie preservation efforts:

That said, I’ll throw out my hope and my wish that something more will be preserved for future generations. I think the best opportunity would be at site still located on an airport property, park or other open space (e.g. land already used for something else compatible with the display) near a reasonably sized urban area that could drive visitor traffic. Ideally, it would be close enough to an established aviation museum to take on and curate, and the site could potentially be used as an outdoor aircraft display. If the antenna towers from an older site can be found somewhere, moved from a less accessible site or replicated and restored along with a blockhouse, this could be a good way of preserving this important piece of aviation history.

If anyone one has any ideas are knows a group that may be interested, please message me.

Next: Mapping the Range